I got a sorta NAS device which is arm based. I’m also getting ready for my third, and I hope against hope final, beets database. (Reason for that is for another thread.)

I’m starting ‘from scratch’ on a new platform, which seems like it will work. I will document my progress until it becomes clear I should switch back to x86.

Pip install on its own failed, probably for armbian related reasons of not including the above tools by default.

beets installed without wheel, but it did note an error. I installed wheel to be safe. As python experts know, the pip version of beets is far more current than whatever is in the Debian / Armbian repo.

I will be moving to linuxserver.io container, managed by portainer. More info as I work.

Thinking of moving to a container for my main / ‘production’ beets instance. In theory it will be easier to move it between servers / devices, and allow it to play nice with other stuff on my NAS (similar to a python virtualenv). Anyone have thoughts? Anyone using it currently? Looks like linuxserver is the only one actively supported. Configuration looks simple enough:

Mapped a volume with my music so the container can see it. Used a “bind” which has security issues, but at least I did it read only. 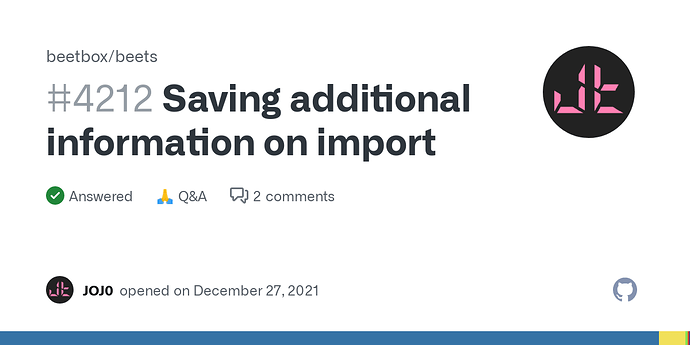 I'd like to achieve the following on import: Keep record of the path of the original file was residing in before moving into beets folder structure (import: copy: yes is set) The reason why I&#...

Don’t want to maintain my own container, so I have to rerun the above commands on every fresh boot. Ideally the container will have months of uptime once it’s all set up. So nbd hopefully.

Need to reset my docker shell every time I restart the container. The ID changes so I can’t just say docker exec -it 8f2563ef7b1d /bin/bash every time. Portainer has a web shell.

edit: perf is starting to be an issue even with a 4 album library. I suspect it’s the slow 25MBps usb port I have my music on. I’m noticing this with calliope.

Sorry for the bumps- can’t edit old posts. I think there’s a way to compile edits to a container so I don’t have to keep rerunning this. A project for another day.