Beets-Docker-Synology running with no outputs

I have installed beets on my Synology NAS, trough the standard Docker of DSM 7using this container: Docker Hub

Everything looks fine, but when i run the import command nothing happens. I just see the processor running the import process, but no output in terminal. Checked the logs and there’s nothing in there. Any ideas why i am stuck ?

Adding the config file and other Synology Docker specifics. 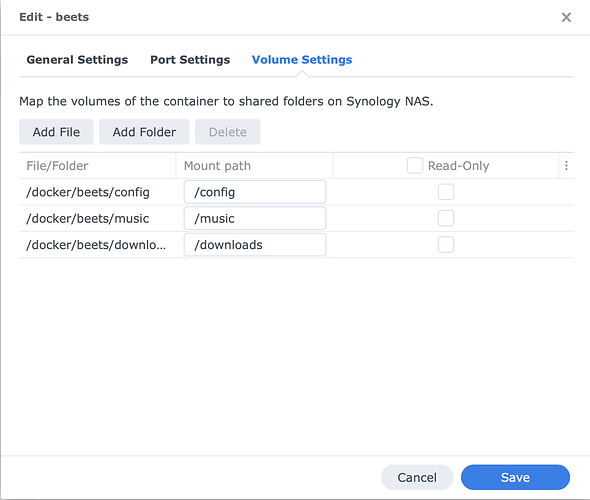 I just see the processor running the import process, but no output in terminal.

Does it eventually terminate and return to the prompt, still with no output? How long does it take?

Is it possible there is just a lot of stuff in /downloads and it takes a long time for the disk I/O and for beets to sort through it?

I second the suggestion to use beet -vv.

Thanks guys ! It worked in verbose mode. Merry Christmas!

It worked in verbose mode.

Any idea why it worked now, but not before?? Verbose mode shouldn’t change what beets is doing…

I guess it’s because beets is running quite slow on my Synology NAS and without seeing any logging I expected that it’s just not working. as mentioned above the process was rising in usage though, but learned later that it’s up and down all the time. So verbose mode now gives me much trust that things are going on, but indeed there should be no difference in execution.