I’m trying to import a few albums, and sometimes it happens that beets finds the correct album (either by itself or from me informing the MusicBrainz ID) but it fails to identity a couple tracks in the album - usually suggesting renaming a track to another track, swapping the names, etc.
I have tried using the T option and manually inform the ID of all tracks, but then I lose the album information and the tracks are moved to a “No Album” (or something?) directory, which is not what I want.

Ideally, I would like beets to inform beets the correct relation track <=> file and it renames the files as appropriate, or somehow refuse the renaming of certain tracks in the album (since the Apply option renames everything)

What’s the correct approach for this?

Pic is an example of me trying to import the Miracle Milk album from Mili. In this case, about half of the tracks are swapped between themselves. What’s the correct fix for this? Should I rename the files before trying to import? 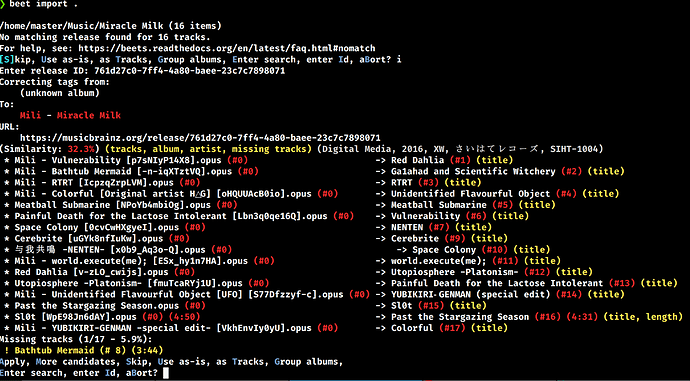 The edit plugin is really useful for changing matches on the fly:
https://beets.readthedocs.io/en/stable/plugins/edit.html

…but it may not be the right thing for “forcing” specific track mappings. Worth a shot, though!

possible X-Y problem- does this persist with fromfilename?

Asking about your attempted solution rather than your actual problem

yep.
I thought I had this plugin enabled, but I had typed “fromFilename” and not “fromfilename”. oops.
thanks.

We have good plugin error info, but you have to scroll up to read it.

I’m not sure where this info should go if you were doing an import.