I think we should consolidate to one discussion forum, rather than two.* I don’t think we do a good job of cultivating a community feel, even though everyone in both forums is very helpful and welcoming. It’s hard to remember who’s who across two sites and two avatar systems, and it’s hard to remember to check two places.

As such, here is a one-question survey on which platform you like better. 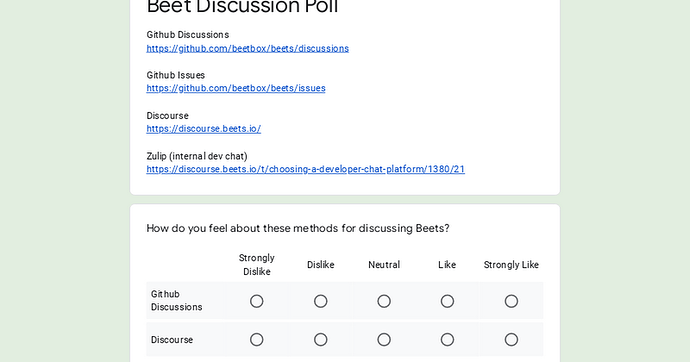 There are extra questions if you want to provide more info.

In the last month:

IMO, the winning platform should have:

If the results between Discourse and Github Discussions are statistically similar, I think we should either flip a coin or let core contributors make an executive decision. (I hope the results are strong enough we don’t have to resort to stats, since I’m rusty on that.)

Right now we have, afaik: irc (mentioned here beets/faq.rst at 9bab200d3d496968bf517151ca43a91b0aafc26a · beetbox/beets · GitHub ) internal dev chat (gitter) github discussions github issues discourse For a project that has <10 active discuss-ers in any given week, this is absurd. I don’t want to have to check a bunch of places to keep up with discussions. In particular, I think a ‘public’ IRC should be retired, since it’s near impossible to search for future generations. I also think we sho…

Beets has what I would consider to be a chronically small contributor/user base, relative to its usefulness and other open source projects. I think laying this foundation for a strong community could allow it to grow and get more contributors and retain them longer.

Note: The final response is mine.

No competitor is as good as Discourse/Github Discussions

There’s no use rocking the boat; because both plausible and implausible replacements for the two main platforms don’t have any kind of support in the community. Reddit is the closest, with about half the (strongly like + like) totals that Github or Discourse does.

Discourse vs. Github is a toss-up

I wouldn’t feel good making a hard cutover based on these results. There’s no clear winner.

Among Beets Contributors, a Stronger preference for Discourse

* No response was converted to “3” (neutral)

We got these 3 comments:

9 of 13 respondents were contributors 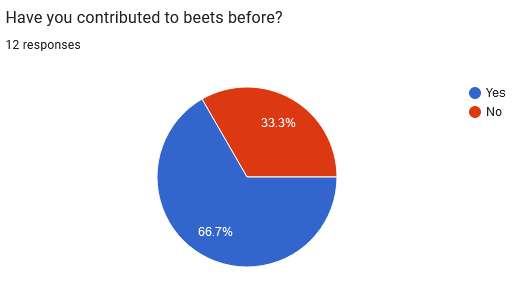 Self-identified, again. A large number (6ish) supplied usernames which we can verify if needed.

I use “love” and “hate” in spots as a shorthand for “strongly like” and “strongly dislike”. There is survey theory research that says these terms are not interchangeable.

I realize now that I should have instructed people to leave the answer blank if they had never heard of something. But “neutral” is a similar response.

Sampling Bias: The links were only posted on Discourse/Github Discussions

If someone truly hated those sites, they never went to them and they never answered the survey. With many community projects heading to Discord and Reddit, I wonder if there’s a certain kind of (younger?) contributor we aren’t getting now. Perhaps we could link to the survey in the release notes for an upcoming release, or on the wiki.